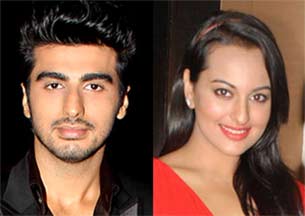 Actress Sonakshi Sinha is working with Arjun Kapoor for the first time in "Tevar" and says she respects her co-star for being a thorough professional.

"He is cordial with everybody. He is not overtly friendly, but he is a very chilled out guy and good to work with," she said.

"What I really respect and like about him is that he is a good co-star and very professional on the sets and knows what he is doing depite the film being his father's production," added the 26-year-old.

Both Arjun and Sonakshi are star kids - while Arjun is the son of producer Boney Kapoor, Sonakshi is the daughter of actors Poonam and Shatrughan Sinha.

Sonakshi knows her co-star since her school days as she, Arjun and his cousins - actress sonam Kapoor and her sister, producer Rhea went to the same institution.

"Actually, Arjun and I were in the same school. I knew him because Rhea and Sonam too studied in the same school, so I knew him as their cousin brother, but we were never really friends. Now we are just trying to get to know each other. He is really a good actor and bright fellow."