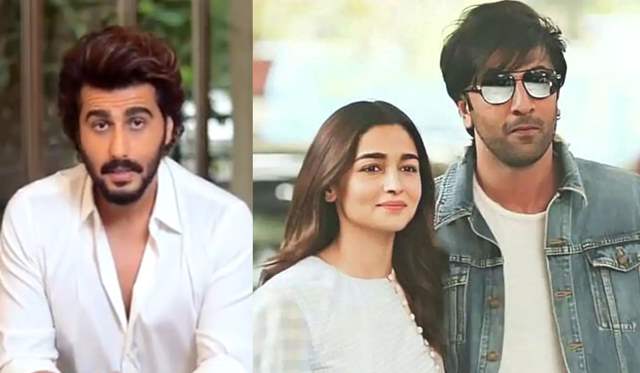 Today marks actor Ranbir Kapoor's brithday as he completes 39 years of age. The actor has been off the movies for almost three years now where his last release was back in 2018 in the form of Sanju. But that doesn't in anyway mean that he has been off the news brigade where he has been in constant news owing to his real-life relationship with actor Alia Bhatt and has also been active in multiple commercials.

And while today is indeed a special day and girlfriend Bhatt would have multiple plans or surprises leading to the day; Kapoor and Bhatt's friend and actor Arjun Kapoor went on to wish Ranbir Kapoor in the most special manner but also with his own twist. On one hand, he posted a throwback image of himself with Kapoor and friends from the earlier days but also wrote a quirky caption asking Bhatt to tell Kapoor that he needs better pictures with him and not just a throwback image from their younger days. His caption read, "This picture only reminds me that I need better pictures with the birthday boy... @aliaabhatt I think you must do the needful ma’am... PS - Also just realised my confidence at 21 knew no bounds just see my chest flaunting abilities !!!"-

Talking about their plans, Bhatt and Kapoor are currently in Jodhpur. The couple recently jetted off in a private plane. It is being rumoured that they are scouting wedding locations in Jodhpur. Apart from this on the work front, Ranbir Kapoor has four films lined up in the form of Shamshera, untitled Luv Ranjan's next, Animal and the long-delayed Brahmastra. While Arjun Kapoor has Ek Villain Returns in his kitty and Bhatt also co-stars in Brahmastra apart from having Gangubai Kathiawadi, RRR, Darlings and Rocky Aur Rani Ki Prem Kahaani in the works.

+ 6
2 months ago OMG! That writing style - CRINGE!"Today marks actor Ranbir Kapoor's brithday as he completes 39 years of age. The actor has been off the movies for almost three years now where his last release was back in 2018 in the form of Sanju."