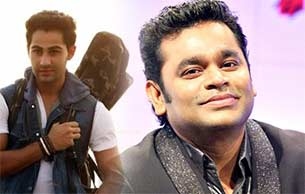 A.R. Rahman is all set to mesmerize with yet another path breaking and mellifluous film album which is Directed by Arif Ali,Produced by Eros International and Illuminati Films, this film marks the entry of Raj Kapoor's grandson Armaan along with southern beauty Deeksha.

In what's fantastic news for Rahman and music aficionados out there, the ace musician is going to have a live performance for the music lovers very soon, right here in Mumbai!! The special LHDD unplugged evening will also be a tad nostalgic and bring back happy memories for Rahman and his crew as the city of Mumbai had seen the Oscar winner last perform in 2011!!.

As one would expect from A.R. Rahman's compositions, the music of the movie is beyond brilliance. Having composed all the songs, the makers of the movie reveal that Rahman has taken his unique music-making-process to a new level and has created something radically different from his previous compositions!

In fact after a long hiatus we have a groovy party number from Rahman in the shape of 'Khalifa' that has already got the country buzzing to its transcendent beats. The song will take centre stage that evening and we hear from the makers that it was composed in one night, and was a result of the overnight jam session. The number has become a 'phenomenon' of sorts!!

Not only is the occasion a sweet twist of destiny with Rahman's both Mumbai Bollywood concerts involving the Kapoor cousins but interestingly, Armaan is also the youngest actor in Bollywood for whom AR Rahman has lent his voice to in his movie career!