View Profile
Choose your words wisely, they say, a lesson papa's princess, Sonam, may have forgotten!
Still jiving at her appearance on the infamous talk show, 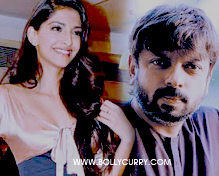 Koffee with Karan, Sonam Kapoor was heard hinting a comment towards her debut director, Sanjay Leela Bhansali, on what the actress would do if she woke up one morning as SLB himself. Trying to be jocular, Sonam replied that she'd add more color to her life rather than just having the plain black and blue.
While Sonam and others believed it to be a comment in good humour, Bhansali was not of the same opinion. In fact, he was quite offended by the statement. However, once Sonam realized that she had hurt the acclaimed director, she did apologize to him. Although SLB forgave her easily, rumors have it that an awkwardness still resided between the duo.
So in bid to enforce her apology, Sonam treated Bhansali to dinner on her birthday. After a thorough heart-to-heart over a meal, things between the two seem to have gone back to how it was before the controversial show. However, SLB did suggest that Sonam should be more careful with her words in the future.
Wise words form SLB, we say. And maybe Sonam should have a heart-to-heart with another co-star she may have offended during the ordeal, ey?