New Delhi, June 12 (IANS) The Supreme Court Thursday cleared the decks for the release of Kamal Haasan's magnum opus 'Dasavathaaram', dismissing pleas by a Hindu sect that the film would hurt religious sentiments of some.

The court dismissed all cases against the Rs.1.3 billion film, in which Kamal Haasan plays 10 roles. The court asked the petitioner to watch the movie 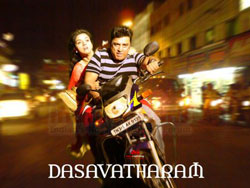 Featured Video
first and said if they found anything against Hindu beliefs they could approach the court again.

The film is scheduled for a worldwide release Friday.

One of the 10 roles essayed by Kamal is of the disciple of late Vaishnavite Ramanujar.

Referring to the scene, two Vaishnavites filed a petition in the apex court calling for the film's release to be stopped.

The petition was filed by R. Bakthavatsalam and Swami Govinda Ramanuja Dasa from Chennai. According to the petitioners, the film would hurt the religious sentiments of 500 million Vaishnavites if the screening was not stayed and would create a law and order problem.

'The film 'Dasavathaaram' projects violent clashes between Saivites and Vaishnavites, hurting the religious feelings and sentiments of the entire Hindu community,' the petition alleged, challenging a Madras High Court order which refused to put a stay on the film.

'Dasavathaaram' is to be launched with 1,000 prints Friday.