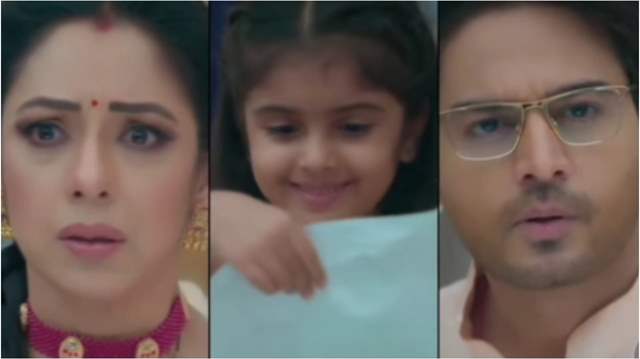 Star Plus show ‘Anupamaa’ is getting the love of the audiences. The current track of the show revolves around Kinjal announcing her divorce with Paritosh which has shocked the Shah family. Rakhi and Anupamaa have been supporting Kinjal while Leela is furious on her. Toshu is hell bent on making things difficult for Anupamaa by separating her from her daughter choti Anu.

In the upcoming episodes, Anuj and Anu spend quality time with choti Anu and explains her the importance of Kanya pooja. Choti Anu gets excited to go the Shah house for Kanya pooja. A few ladies come to Kapadiya house from the place where Shah house is located and invites Anu and Anuj as a chief guest for the garba competition. Anuj- Anu has fond memories from that particular garba and agree to be a part of it. Anuj gives them a hefty donation.

Barkha stops the ladies and gives them sweets as a return gift. She tells them that Anu has struggled a lot because of Shah family as they never treat her with respect. Barkha manipulates them by saying that Anupamaa will never address the same but people should know about her struggle. The ladies agree to find a way and tell Anupamaa’s struggle story to everyone.

At Shah house, Baa talks about meeting Samar’s alliance’s family at the garba night but Samar states that he doesn’t want to get married after the two failed marriages that he has seen. Kinjal tells him that it will be his decision but if he decides to get married, he should be a husband like Anuj. The family perform kanya pooja. Toshu marches towards doing the rituals but Vanraj stops him.

Furthermore, family enjoy the garba night while Pari gets kidnapped.