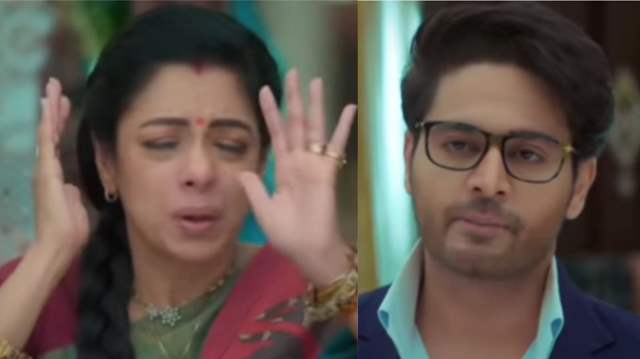 Star Plus show ‘Anupamaa’ is getting a lot of love from the audience. The current track of the show revolves around Pakhi, Toshu, Baa and Vanraj venting out their aggression on Anupamaa. Pakhi has deeply hurt Anupamaa and has no remorse what so ever. Anuj supported Anupamaa but couldn’t do much about the whole scenario.

In the upcoming episodes, Anuj and Vanraj get into a physical fight and both of them try to bring each other down. Anu asks them to stop and asks Anuj to wait outside as she needs to speak to the ladies of the house. Anu addresses to Pakhi, Baa, Kavya, Kinjal and Rakhi. She explains to Pakhi that she can never break the relationship that they have. She hugs Kinjal and tells her that she will always remain her daughter. Anu asks Kavya, Baa and Rakhi to take care of Kinjal. She prays that God forgives Pakhi and hugs her. She also hugs Kavya and Kinjal and  takes an emotional exit from there.

Anuj confronts Bapuji for being away everytime people question Anupamaa. He tells him that he will not let Anu enter Shah house again. Anupamaa leaves Shah house and tells Vanraj that he never knows if the God would plan her to re-enter the house in swag.

Furthermore, a promo of the show is getting viral wherein Anuj is seen getting bed-ridden while Anu is facing the taunts of the world. Anu and her daughter both await Anuj’s return as they face the cruel world.