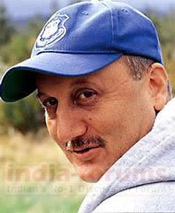 Mumbai, Oct 19 (IANS) Veteran actor Anupam Kher is now part of an amateur-detective series that stars Indian, Pakistani and Australian actors. And he has just shot the first feature titled 'Mr Bhatti Ki Chhutti' in Britain for the proposed pack of films.

'I entered a new international phase of my career when I did Gurinder Chadha's 'Bend It Like Beckham'. Now I'm going into another phase with 'Mr. Bhatti Ki Chhutti'. It's directed by my NSD (National School of Drama) mate Karan Razdan,' Kher told IANS.

'We shot it as a one-off thing. But the film has been such fun, we've decided to shoot an entire series of feature films based on the exploits of this amateur detective called Bhatti. We'll have 'Mr Bhatti Goes To China', 'Mr Bhatti in New York', and so on and so forth.'

Kher, who was seen in Pradeep Sarkar's just released 'Laaga Chunari Mein Daag', is pretty excited about the new project as he gets to play different shades in the series.

'I've a double role in 'Mr. Bhatti Ku Chhutti'. Besides the detective, who's like Feluda and Hercule Poirot, I also play a sinister international terrorist. The idea is to let this detective and by proxy the audience have fun. And we're making the series in 'Hinglish' and with an international cast comprising of Indian, Pakistani and Australian actors.'

Detective Bhatti promises to entertain audiences in the near future.

'Bhatti promises to be our first detective series. Apart from being an amateur sleuth, he's a big Amitabh Bachchan fan.'

In fact, the Big B is expected to make an appearance at the end of the film.