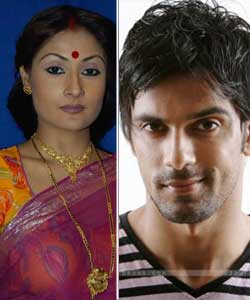 It's been long since the news of Anuj Sachdeva dating the elderly actress Urvashi Dholakia has hit the tabloids. The duo has been spotted regularly at parties, and have spent quality time together.

However, the latest buzz is that the two have broken off, and are no longer enjoying their companionship.

A little birdie tells us, "Anuj and Urvashi have not openly talked about their relationship till now, but the fact is that they were together. But now it looks like they have issues with compatibility and are no longer together".

Urvashi did not want to comment on this at all.

Anuj Sachdeva on the other hand told us,  "There was nothing between us. We have a same group of friends and roam around together. I have never said anything about our relationship. People just write what they want to write".

Anuj who is currently in Srilanka shooting for an ad film is looking for his next role. He was recently offered Zee TV's Sanskaar Laxmi. "Yes I was offered the show but I could not take it up due to prior commitments in Srilanka".

Looks like the cozy phase of Anuj and Urvashi has hit a rocky patch...

-Preeti- 9 years ago when did they start dating is a question to me ...

sbvsb 9 years ago Who cares! The guy cannot act, looks fab which makes him a perfect for a lead role on small screen. And she from the little I have seen her on tv seems desperate to stay relevant.

Marz_Mahira_fan 9 years ago @ Meena i knew this will come from you coz you just cant refrain urself from commenting on Shweta...this itself shows ur obsession towards Shweta thats why you brought Shweta's name out of no where here...And i can totally understand why you did so coz u r that LOOSER n CHEAP Raja Chaudhary's fan n you r as well Losser n Cheap like him... And by the way Meena i dun have dogs so i give dhamkis to those ho behave like dogs n bark for no reason n poke their nose in every issue...Now you got why i gave you dhamki... :-D :-D

destinylove 9 years ago I seriously wish anuj concentrates on his work for a while..Urvashi saw her in Meethi choori" was little bit loud aggressive ..But I agree it is their/her personal lives..OMG this relationship make up/breaks ups are becoming too much of news

alina_lale 9 years ago good to know

Xlovesu 9 years ago Their pair is really disgusting !!! It even sounds awful tat thy were in a relationship!!! Thak God thy atleast broke up!!!

HaHaHeHe-Hupp 9 years ago oh as anuj refuted this unfounded rumour not to be anything between both of them . now for some times urvashi should forget about this dating setting and after 10 years she should think again about that as even then she must be jawaan..

brainychild92 9 years ago they were dating?? okay... why is that a bad thing on the forum? its her life.. from what i understand, its because her teenage kids.. please, this ain't the 50s anymore; time to MOVE ON w time!lol