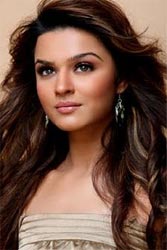 However, the two got caught in a very ugly fight which happened over the weekend in front of the crew members.

A little birdie from the sets told us, "Aashka and Ansha had been great friends, and would share their free time together in Aashka's private room. In fact, Aashka had gifted Ansha with costly gifts worth Rs. 3000/. But for some reason or the other, Ansha stopped talking to Aashka, and started avoiding her for the past few days. In fact, Aashka had even given Ansha some money as a mark of gesture when the girl needed money urgently on one particular day when she had come to the sets without money in her bag".

"The fight started when Aashka very politely asked Ansha when she would repay her money. But Ansha reacted very badly to it, and started abusing Aashka. She uttered some horrible words which a decent and civilized woman will never even think of uttering. The entire crew and cast members were witness to this ugly event. Ansha was also heard telling Aashka that she was no Ashwarya Rai, for behaving like this", the birdie tells us.

When contacted, Aashka told Telly Buzz, "I really did not expect this from her. In fact we were very good friends, and we have had some fun time on sets. She suddenly stopped talking to me. But one day, she barged into my make-up room, where I was with two other people. She yelled at the top of her voice, threw money at my face and talked in such nasty language that I will never forget. I have been in the industry for many years, and have never experienced such an incident. Even when she was talking, I kept quiet because I did not want to stoop low. And even when I was a new comer like her, I never ever remember behaving like this to anyone. Even today, I have a fond relationship with all my co-stars who I have worked with, in my previous shows".

The birdie tells us, "Aashka has taken objection to such behaviour from the girl, and has told the production house that she would not shoot with the girl anymore, till the time she gives her an apology".

Aashka told us, "Yes, I have informed the production house. In fact all of them knew how badly she behaved with me. She owes me an apology, and I will not shoot with her till then; and I stand by my decision".

We tried calling Ansha, but her cell remained switched off.

DemonStar 6 years ago These kind of false stories, gossip mongering and fanaticism are the reason I loathe this industry. All I know is, our Ansha di would NEVER behave in this kind of manner under any circumstances. We love you, Didi.

Padmpriya 6 years ago What a made up stupid story media..
this all is just fake .. No fight occured between Ansha di and the other woman.

Pyari_Zahra 9 years ago Eeeeh, that doesn't sound good, hope they are on good terms now. x

Pallavi_2013 10 years ago if ansha is roops then wht r the creatives waiting for ? they shuld replace her cause anyway we don't like present roops pairing with our cute Baaji.

fm05 10 years ago Hmm i'm confused which one is Ansha as on the forum it says she plays Leela but the article says she plays Roops! Either way this must be exaggerated as there have been many scenes where all three sisters are together so it must be resolved.

betty123 10 years ago hey guys solve ur probs urself.
I like both of u

aasthad 10 years ago God... I hated that roop already. What unprofessional behaviour. Please rher. She is highly irritating. Bring on someone better.

'Naagin 5' To Welcome Two New Entries in The Form of Karan ...
31 minutes ago