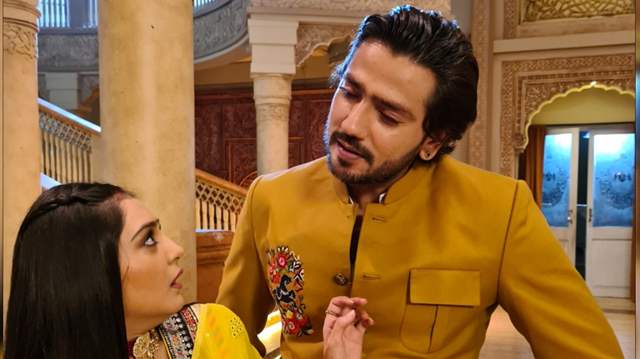 Zee TV’s popular show - Tere Bina Jiya Jaye Na has kept the audience at the edge of their seats since its launch, courtesy of its engaging and intriguing storyline. The show follows the lives of Krisha Chaturvedi (Anjali Tatrari) and Devraj Singh Rathore (Avinesh Rekhi), and we have to say that their extraordinary and mysterious love story has won the hearts of one and all. However, it is the latest twists and turns that have kept the audience hooked. In fact, with some mysterious circumstances and horror sequences taking place in the haveli, it looks like Krisha is going to go through a tough time. What’s more is that Anjali Tatrari is also petrified of ghosts, which makes it even harder for her to shoot these sequences!

In fact, the actress is so afraid of ghosts that she never watches a horror movie alone and always tries to keep the lights on until she sleeps. Knowing about her fear of ghosts, everyone on the sets has been teasing her by wearing ghost masks and trying to scare her. However, it was a prank by Romil Chaudhary that truly got her spooked, so much so that she didn’t go into her makeup room alone for a long time. Romil had actually switched off the lights in Anjali’s makeup room once and played some spooky noises through a speaker. What’s more is that when Anjali tried to get out of the makeup room, she was terrified by a person standing in front of her in a white saree. While it was Romil in the get-up, Krisha didn’t realise that and ran away screaming, leaving everyone in splits!

As Anjali Tatrari mentioned, "I have always been scared of ghosts and spooky surroundings, however, I love watching horror movies. Having said that, while we were shooting for some horror sequences for Tere Bina Jiya Jaye Na recently, our set really spooked me. While Avinesh has been incredibly supportive, Romil pranked me and truly left me terrified. It was actually a late-night shoot and while I was getting ready, suddenly the lights of my makeup room went off. I could hear some strange voices as well, and while I got afraid, I was determined to get out of there. However, Romil, dressed up as a ghost, came in and scared me beyond belief. I thought my most horrific dreams were playing out in front of me and I screamed so loudly that everyone around would have heard me. When I heard everyone laugh, I understood that it was a prank!"

While Romil’s prank left Anjali scared to go inside her makeup room alone, Jaya Maa and Vamika are busy setting up a trap for Krisha on the show. It will be interesting to see if they manage to successfully execute their plan and drive her away from Devraj or will Krisha spoil their plans.

janenene 3 months ago The plague tortoise, whose brain cells are gradually depleted, thinks he is smart enough to get away with this small skill.