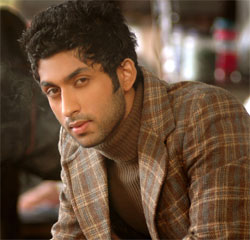 All are aware of the career oriented and smart Daksh Tripathi of Sony TV's Chhajje Chhajje Ka Pyaar. The character portrayed by Anirudh Singh has been well appreciated. But is the real Anirudh similar to Daksh?

Aniruddh says "Daksh and Anirudh are similar in one way as they both are career oriented and do love their family. But at the same time, Aniruddh never forgets that family comes first".

Talking about the grey shade that his character possesses Anirudh says "Actually the character cannot be completely termed as grey shaded, because Daksh is a person who is very career oriented and will do anything to get to the top. He is of the attitude that his family will be happy at the end of the day, as he earns money for them".

But what happens ultimately will be unexpected. The actor adds, "As of now, he is now in his first job and is always trying to prove himself. But in future, he will take up an offer that will bring about a split in the families".

After Khwahish, Chhajje Chhajje Ka Pyaar is Aniruddh's second show with Sony TV and he is completely excited about it. Theatre and ads kep him busy till now, and today he feels fortunate to be working with experienced cast like Virender Saxena and Kiran Kumar.

Catch the excitements that happen on the terrace through the show Chhajje Chhajje Ka Pyaar on Sony TV.

punjabi.princes 9 years ago i wonder how and what he will do that makes his character have a grey shade? and a split b/w the family?!?

Shipra_S 9 years ago although i don't get time to watch this show..so i dunno how well he acts...but i really like CCKP n always follow it through written updates.

-Nightingale- 9 years ago Aniruddh's characters is still opening up...so all the best to him...

-Humaira- 9 years ago lol it means a terrace!

Jessuu 11 years ago funny..jst today I got my bf the malibu playboy cologne! ;)

hindu4lyf 11 years ago LOL india really is living in the 21st century ;)