The unit members and cast of Sapna Babul Ka.. Bidaai were taken aback recently when Seema Kapoor, who plays the role of Vasundhara Rajvansh survived a very scary fire accident on the sets!

Featured Video
It so happened that Seema Kapoor and Natasha Rana who plays the role of Ambika Rajvansh were seated on a sofa and were busy talking, when all of a sudden Seema Kapoor’s sari and a side of the sofa caught fire. Well, wondering what happened next? In total filmy style, Angad Hansija who plays Alekh in the serial came to her rescue and extinguished the fire with his hand! The proud mother of Alekh, Vasundhara aka Seema Kapoor exclaims, “I was caught unaware when Angad came to me, picked up my sari and put off the fire in no time. I immediately recollected Sunil Dutt saving his mom Nargis in the film Mother India”.

The hero of the day Angad Hansija is glad that his timely action prevented a mishap happening on the sets. “I was sitting opposite the two ladies and was going thro’ my script when I noticed smoke near Seemaji. Then I saw fire below in her sari and also on the sofa and quickly went up to her and put it off. I guess a piece of paper from the big light fixed right above fell down and caused this fire. The incident brought about an unrest and tension in the whole unit, but all’s well that ends well”, quips Angad..

Well, why fear when a son like Angad aka Alekh is around? 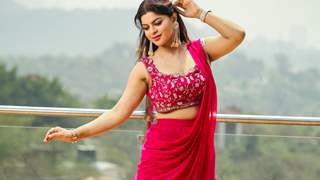 **sanya** 14 years ago i heard kareeena dont like bipasha at all. wonder if kareena's gettin jealous LoL!!!

but thk god she is ok

+ 3
14 years ago AHHHA LMAOO omg this made me laugh so much LOOOOOLLLL,
pluss thatss sweet

14 years ago aww omg he distinguished the fire with his hand! :O poor angad!

14 years ago awwwwwww that is soo sweet wow what sweet son,, she must very proud o play his mother now

14 years ago That must be scary for her. So sweet of her beta