Aneesha Kapoor, seen earlier in 9X' Dahhej is back into action as she will now play the perfect 'Kabab Main Haddi' for our Amar and Divya in Zee's Banoo Main Teri Dulhann. 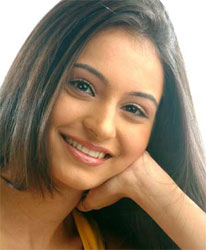 Featured Video
Confirming the entry of Aneesha is Shyamashis Bhattacharya, Producer Shakuntalam Telefilms who says "She plays a village belle who will enter Amar and Divya's life. The manner in which this is shown is quite interesting to watch".

On the probable love triangle formed, he quips, "Yes, there will be a kind of triangle formed, but it will not be from Amar's side, and will be from the girl's point of view. I can't get into many details as of now".

Aneesha Kapoor, the new entrant in the serial was thrilled to get a warm welcome from the unit of Dulhann as she began her shoot yesterday. "I play the small town girl Gauri who gets married very young in age and is now waiting for her husband to get back from abroad. As the girl's 12 years of wait nears its end, her life is ruined by one act of Amar, the details of which I cannot state", says Aneesha.

However, our source from the sets reveals that, "Amar gets involved in a road accident in which accidentally, Gauri's husband who is on his way to get back to his family, meets with his death. Amar who is guilty-stricken goes to the guy's house and breaks the news to Gauri and the family about the person's untimely death".

The serial which saw the death of the very popular vamp Sindoora Singh lately, sure has few interesting tracks lined up for the viewers.

14 years ago Miss Aneesha, I dont wanna see u in dulhann.plss get out from here.if u create ant problem between them,then i''ll kill u...got it????????

14 years ago y cant they jus kill sindoora n end the show with a happily ever after??? wats the need to drag it sooo much......their TRP's will go down eventually

14 years ago i hope amar doesn't act like the husband or anything..
hmm .. it'd be nice to see divya getting jealous for once. lol

14 years ago same plot as the serial Sindoor ... why so they drag so much?

14 years ago oh okay so she wont think that amar is her husband cause amar willl break to her............good i dont want her to fall for amar i dont mind a revenge but dont come in between amar and divya

14 years ago This stroy is going the way as one of the Sahara show which have Rani caracter in it. Same stroy boringgggggggggggggggggggg

+ 5
14 years ago very typical twist in indian shows!
like come on we don't need to see it again
shes obvisly going to want to marry amar and turn evil to break amar and vidya