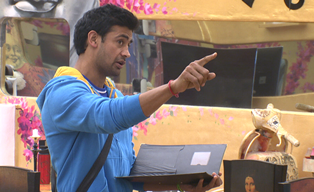 Friendships seem to have become a fickle term amongst the Bigg Boss contestants this season. As the second day of the Zindagi Na Milegi Dobara task continues, Sangram Singh gets direct authority from Bigg Boss to reduce the lives of his fellow housemates every time they break a rule of the house.

In irritation, some contestants rebel against the task and purposely make mistakes. Seeing this, Sangram decides to punish all the contestants - even the ones who have not been breaking the rules.

His close friend, Andy, however had a different opinion on this new rule being implemented by Sangram. Calling him unfair, VJ Andy gets upset with Sangram. He further tells him to not make his own rules and stop being stupid while playing the game. Sangram, however, clarifies that as supervisor of the task, he will not pay attention to what others have to say and continues to believe that his rule is fair.

All the contestants are shocked upon seeing the friends turn foes right before their eyes. VJ Andy furiously tells Sangram Singh to stop talking to him. Not liking the tone in which he was being spoken to, Sangram warns Andy harshly following which VJ Andy decides to ignore Sangram.

Is this the end of the road for their friendship? Only time will tell...

veenisha 6 years ago Sangram was just too much in this task. after this task he has no right to call anyone unfair