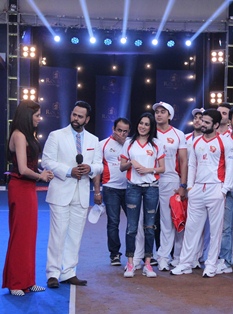 Kamya Panjabi and Andy go back a long way since their Bigg Boss days. Though they were not exactly best of friends then, they did share a love-hate relationship.

After their stint last year, the two met again and this time on the field of Box Cricket League. Everyone is aware of the relationship Kamya Panjabi, team owner of Jaipur Raj Joshiley, shares with Karan Patel. The two came out about their relationship openly for the first time in the BCL promo where Karan referred to Kamya as his girlfriend.

During the Jaipur Raj Joshiley vs Kolkata Babumoshayes match, Kamya was seen agreeing to everything that Karan said about the team and their expectation from the matches. Seeing her so docile, Andy couldnâ€™t control himself and burst out saying â€œWho is this? This is not Kamya Panjabi..she is an imposter!!â€ leaving everyone in splits.

Andy was definitely shocked to see this new version of Kamya as opposed to the one with a bindaas attitude and upfront nature.

archie12 5 years ago Karan Patel u r a great actor,love u cutie

U_naaz 5 years ago Love you the dimple boy Karan Patel !!

KP_fan 5 years ago Karan Patel u r the best...luv u sooo much

Ishra_love 5 years ago Karan Patel your the best