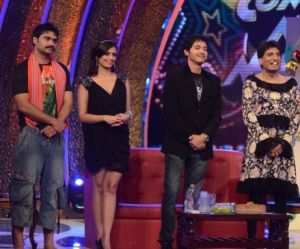 Star Plus came up with their unique comedy show Comedy Ka Maha Muqabla where the mentors competed with each other with their respective teams. The show has Bollywood name like Shreyas Talpade who made his television debut with this show.

Telly Buzz had already reported that teams of Arshad Warsi and Shreyas Talpade will compete with each other in the finale and here we give you the final results.

A little birdie from the sets informs, "Yesterday, the show saw its grand finale shoot, where two most liked teams of Shreyas Talpade and Arshad Warsi fought against each other to win the competition as Shekhar's team got eliminated in the last episode of the show."

"There was no special guest for the grand finale and in the competition between Shreyas Chi Mandali and Arshad Ke Pantars, Shreyas chi mandali took the cake and won the competition. Along with these two competitors, Raveena's team and Shekhar's team also joined hands to add spice to the finale, their teams also performed for the finale ,"adds source.

We contacted Roshni Chopra (one of the contestants from the winning team) but she remained unavailable for the comment.

When contacted, Rajesh Kumar told, "We have shot for the finale yesterday but revealing the results is really unethical from my part."

We wish Shreyas Chi Mandali for their victory…

9 years ago Arshads team was betterrr! but the show ended :(

9 years ago Knew they would win cuz of mr. Raju. He's awesome. Congrats to them

9 years ago hurray...i wanted shreya's team to win cause raju srivastav was in it...:)

+ 3
9 years ago yipee...my fav team won...U rock shreyas chi mandali...and finally i am happy that the show get over...it was nothing in front of comedy circus...congrats to shreyas and all the contestants...

+ 3
11 years ago well reading an earlier post with a list of stars to miss IIFA ...it was clear it will be Big B small B and the B - Bahu show!!

what a reality show!

11 years ago Quick get me a vomit bag !! I am about to puke !! Yuck !! I am feeling nauseous and sick with all that syrupy sweet overdose public displays of affection !!

11 years ago wow great ... wish them all the happiness inlife. they make good couple