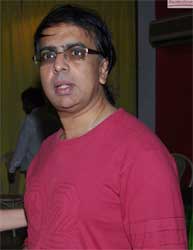 Telly Buzz has already reported that Star One's Rang Badalti Odhani, produced by Yash Patnaik and Swapna Waghmare Joshi, will have the new format of episodic instead of being the typical daily soap.

We contacted Anant Mahadevan and he said, "Yes, I am entering Rang Badalti Odhani and will play the character Sudhama, a very sweet and delighted person which is similar to the character of Rajesh Khanna in the movie Bawarchi. By doing this episodic, I could say I am still acting."

We contacted Karan Tacker and very excitedly he shared, "We haven't interacted yet on the set but he is a great actor and director and I loved him in Bazigaar."

Odhani will go episodic from next week and we can definitely say that, it is a new phase to the conventional pattern of daily soaps.

SHANAKFAN 9 years ago Love RBO n all cameo's in RBO did great ...

-Simple- 9 years ago Loved the fact that he could be part of RBO. Wish him best for the future

Sairaaaa 9 years ago I liked Anantjee's role. It was nicely acted. Thanks TB.

tofeeees 9 years ago really enjoyed Anant's village role it was awesome! RBO gets teh best cameos ever!!!

RB81 9 years ago the episodic tracks were full of fun..enjoyed RBO n shanak..