The cluster of the society, who travels in its air conditioned car and spends peaceful nights in their air conditioned houses, finds newspaper and few minutes of television news as their only source of information about the country. They even don’t bother to know about the section of people belonging to the lower sectors of the society. Director Suhail and his colleagues have understood and depicted the scenario very well in Atul Pandey produced movie Summer 2007. 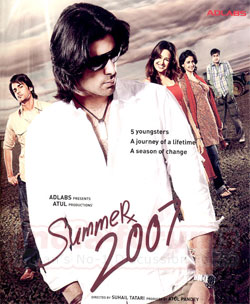 
Life is mere a name of fun and enjoyment for five friends namely, Rahul Sharma (Sikander Kher), Vishakha (Gul Panag), Priyanka (Uvika Chaudhary), Kanteel (Arjan Bajwa) and Bagani (Alekh Sangal), all of whom are final year medical students at Kasturba Medical College. They know about how to rein their ego and that’s how, without thinking for the second time, they all jump into the college politics. When they realize the bleak of the otherwise alluring excitement, they evade making an excuse of projects. Next, being invariably keen on having fun and having less interest in final year project, the five of them reach a hospital in a village near to Goa. There they meet Dr. Mukesh Jadav (Ashutosh Rana) who single handedly runs the hospital which is on the verge of closing down due the absence of help from government. People in the village are so much indebted for monetary helps that they prefer to engulf poison than to ask for money for buying food. The person responsible for the dwindling condition of the village is the moneylender of the village Bagh (Vikram Gokhle). If someone cannot reimburse his amount then he thinks killing them as one of his responsibilities. He doesn’t want the villagers to be self-dependent. That’s why he tries to kill Shankar Gaetonde (Sachin Khedekar) who endeavours on development of the village. Dr. Mukesh, alias Mukya, who also dreams about independence of villagers, comes at the right time and saves Shankar. In that mission of saving Shankar all the villagers come in helping Dr. Mukesh without even thinking twice about their lives.

Suhail deserves claps because of his meticulous eyes on the beauty of Maharashtrian village along with the balance he maintained through his characters, their outfits as well as the language. Sikander Kher, Gul Panag, Uvika Chaudhary, Arjan Bajwa and Alekh Sangal are well in tune with their characters. We especially can talk about Alekh, who attracted the maximum number of eyeballs because of his nonpareil performance in the film. On the other hand Sachin Khedekar and Vikram Gokhle are up to the mark depicting their Marathi characters. Ashutosh Rana throws his Marathi dialogue very well (maybe having a Marathi wife has now been cashed with this film). Mere two scenes depict the chemistry between Ashutosh and Gul but the mere moments are enough to prove their maturity as actors.

People, who think farmers attempting suicide is a mere forgettable issue, should go and watch the film as the film can tell them well about how the issue is derogatory for the prestige of the nation.