View Profile
The movie 'Race' has been declared as a super-duper hit and it has now raced ahead to be the poster for Amul ads. Amul which usually follows the trend of flashing in its poster the 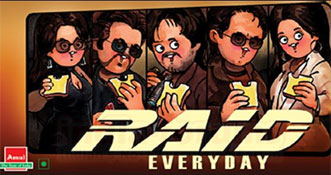 Well, talking of the business that Race is making, it has been reported that the film has garnered a whopping Rs. 22 cr nett in just three days coming close to Om Shanti Om that had opened to that kind of massive collection. It is expected to garner 35-40 crore nett by this weekend.

Boxoffice India.com states the Race continues with its enormous run as the cash registers keep ringing post the weekend too. The film has accumulated 29.50 crore nett (45.38 crore gross) in five days and seems to be heading for 37 crore nett business in week one.