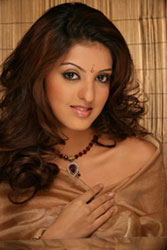 Vivaah Aisa Bhi.  In the film, she will be seen playing Isha Kopikar's younger sister- Sandhya. She plays a college going youngster and shares a very close bond with her older sister (Isha) in the film. Amrita, who is not new to films- earlier seen in films like Vivaah and Tum Bin, believes that a good script and a role that has lot of meat in it would ideally be her choice.


"I have worked with Rajshri Productions for Vivaah almost two years ago!!! Must admit that I immensely enjoyed working with them, it was a great learning experience. As for now, since Diwali is round the corner, I'm planning to buy a sparkling stone for my mum and a big dial watch for my dad," chirps Amrita.

Bhavin Bhanushali and Pranati Rai Prakash to be featured in Punjabi ...