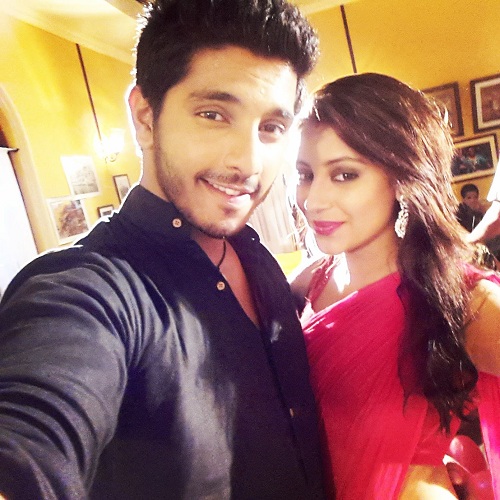 Sony TV's Hum Hain Na has been in the news for its dramatic twists and turns. The makers of the show have enthralled the viewers so much with Bunty (Kanwar Dhillon) and Sagarika's (Pratyusha Banerjee) chemistry and also because of its concept whether a good beta can also be good husband too or not. All of this surely has kept the audience hooked. TellyBuzz has kept you guys updated with all the high points that the show will see.
Well, the next update that we have received about the show is that Ammaji (Shubhangi Gokhale) becomes a kebab me haddi between Bunty and Sagarika.
From our source we get to know that, "In the upcoming track, viewers will get to see a lot of drama lined up. What exactly happens is, Ammaji is so worried about Bunty and Pappu that she immediately takes a flight and ends up flying down to Mumbai. Flying down to Mumbai actually means she spoiled Sagarika and Bunty's honeymoon in all possible ways. She also ends up sleeping in Sagarika and Bunty's bedroom since there is no extra room available in the hotel. This upsets Sagarika so much so that just when she is back to Benaras from her honeymoon, she heads towards her father's home getting upset. On the other hand, Bunty's father shouts at Ammaji and questions her as to what was that urgency that she could not wait for them coming out. Now yet again, Bunty is left in a fix as to who's side she should take - his wife or his mother."
Now this is some drama viewers will definitely would like to watch.
Keep reading this space for more updates on your favorite shows.
Upasana Patel

+ 2
6 years ago Pratyusha Banerjee and Kanwar Dhillon are absolutely wonderful as Saagarika and Bunty in Hum Hain Na.

6 years ago Love Pratyusha Banerjee and Kanwar Dhillon... if Bunty/Sagarika HM spoiled... we will get another one :)

6 years ago Can't wait for Monday to see Pratyusha Banerjee and Kanwar Dhillon!!

6 years ago Pratyusha Banerjee your performance is truly above and beyond, so is Kanwar Dhillon

6 years ago Pratyusha Banerjee, Kanwar Dhillon, and Shubhangi Gokhale are great actors in Hum Hain Na from Sony tv... Prat... we love you...

6 years ago I very like Pratyusha Banerjee and Kanwar Dhillon in Hum Hain Na.