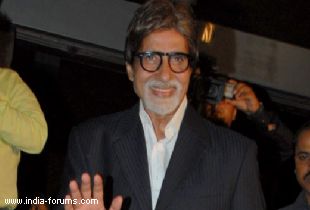 New Delhi, Oct 14 Bollywood megastar Amitabh Bachchan is currently in Sydney shooting for his first Hollywood project 'The Great Gatsby', which is being directed by Baz Luhrmann, and says he is enjoying the process.

'Another land another place ... same profession, but working conditions and systems so different ... a joy to see and observe so much' Amitabh wrote on microblogging site Twitter.

'The greats of Gatsby and I ... a fly! Dwarfed by their concentrated involvement in film and every aspect of making ...!! So Sydney it is in Australia and its pleasantly cold, even though Summer is round the corner ... shooting for 'Great Gatsby',' he added.

'The Great Gatsby' is an adaptation of writer F. Scott Fitzgerald's 1925 novel of the same name and also stars Leonardo DiCaprio, Carey Mulligan and Tobey Maguire.