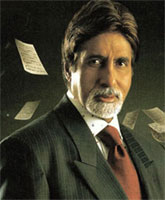 Bachchan had been shooting for Sujit Sircar's latest film 'Shoe Bite' for over a week in the Himachal Pradesh capital and was scheduled to stay on for at least another week.

Police sources said Bachchan travelled by road from Shimla to Chandigarh and then flew from Chandigarh to Mumbai.