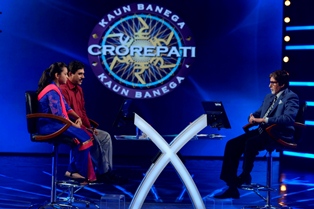 The episode starts with roll over Jodi contestants, Chand Alam & Shadab Alam, from Lahapur Village (UP).  Chand recites a poem for AB.  A fresh FFF takes place and the next Jodi contestants to come on the hot seat is Aakanksha Sinha & Binay Kumar Sinha from Nashik. They share a father- daughter relationship but reality they are best of friends.

Binay Kumar is a deputy manager in a company and his daughter  Aakanksha is an engineering  student. They both are on the show to reduce  their generation gap and get a better understanding about each other. Aaskhansha feels that her father is very conservative and restrict her from going to parties and has imposed a deadline of 7pm. She complains  that her father fails to understand the thoughts and desires of this generation. Whereas her father Binay feels, that although today's generation feels they know everything they still don't know how to conduct themselves.

Hearing their conversations AB shares that during AB's younger days his dad used to tell him to come back to home once the street lamps are switched on. He was very strict about his children coming back home on time but now the situation has completely changed as now youngsters don't come to house till the street lamps are gone off. The father-daughter share that they keep having small arguments and eventually they go to Aakanksha's mother who decides who is right. Aakanksha needs a smartphone which her father is not allowing her to buy as he feels that internet is very harmful and will introduce his daughter to unnecessary things.

AB refutes his thoughts and tells him that on the other hand the internet is very useful and gives one a lot of information, he also shares that he is an internet savvy person  and loves blogging for his fans.
1 Likes

atominis 6 years ago Cute. But KBC should stop such gimmicks. It is good as quiz show and must remain so.

shaina1 9 years ago karishma is definitely the most beautiful actress in bollywood. just hope she comes back to her number one spot. luved her in raja hindustani, biwi #1, and dil toh paagal hai.

-Nafisa- 9 years ago She looks beautiful can't wait for the Dangerous Ishq to come out so I can go watch it.

sirjee 9 years ago ppl do change but karisma ur skin will always shine lyk a baby...sooo glowin skin...waooo...

Yuvika_15 9 years ago always loved her...waiting for her return eagerly...

burnnotice 9 years ago Oh Karisma looks so gorgeous and youthful! Always admired her!

Cutiepie_Rani 9 years ago Karisma is so divine and genuinely beautiful. She looks gorgeous as always.

Nikhi. 9 years ago She's gorgeous - she always has been and always will be.

But something about her eyebrows doesn't quite seem right here. Other than that, it's a nice cover.