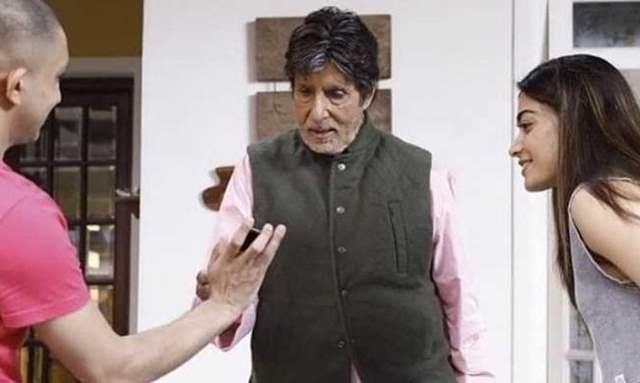 Amitabh Bachchan’s ‘Goodbye’ co-starring Rashmika Mandanna has piqued the audiences’ interest and fans are eagerly waiting for the upcoming film. This Vikas Bahl directorial will feature BigB in an all-new avatar which has kept everyone intrigued. Now, the first look of the megastar from the film sets has gone viral on social media.

The film will also see Neena Gupta in the lead role opposite Amitabh for the first time. Speaking about the same, the actress had expressed her excitement and shared that she is yet to start her scenes with Amitabh and that she is very intimidated by him.

The film will also feature Pavail Gulati of Anubhav Sinha’s ‘Thappad’ fame in a key role.

On the other hand, ‘Mission Majnu’ will be Rashmika Mandanna’s big Bollywood debut opposite Sidharth Malhotra in the lead role followed by Goodbye - which is slated to be her second Bollywood venture.

The actress is a sensation in the south and fans just can't wait to see her sizzle on the silver screen in Bollywood.

He is also a part of Nag Ashwin’s untitled next starring Prabhas and Deepika Padukone in the lead roles. He also stars in Nagraj Manjule of ‘Sairat’ fame’s Bollywood debut film, ‘Jhund’.

He also has Rumy Jafry’s ‘Chehre’ co-starring Emraan Hashmi and Rhea Chakraborty in the pipeline.