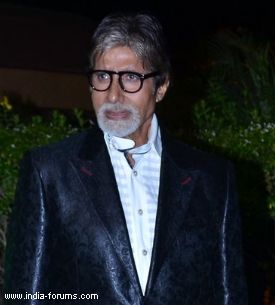 Indian cinematic icon Amitabh Bachchan Friday took to the Penguin Annual Lecture 2013 podium, much to the joy of an eclectic audience of almost a thousand, and left them more star-struck as he spoke about empowering the country's women, Indian cinema, poetry and more.

The 71-year-old, looking handsome in a black formal suit, reached the venue, the Thyagaraj Stadium here at the scheduled time. The sound of the audience's applause took over the netball court at the facility and Big B, as humble as he is, responded by flashing a smile and folding his hands to gesture a "Namaste".

He touched upon his memories of his father, the late legendary poet Harivansh Rai Bachchan, whose birth anniversary happened to be just "two days ago" on Nov 27.

"A decade without him," sighed Amitabh as he shared some of his conversations with his father during the lecture, the seventh edition of the annual event organised by Penguin Books India.

Big B tried to convey a connect for his presence at the event by saying the invitation for him to address the gathering has to do with the growth that the Indian cinema has witnessed over the years.

"Cinema was looked down as something infra dig 50 to 60 years ago," he said, and pointed out Penguin Books India's decision of inviting a film actor like him to deliver a lecture that he had earlier described as a "prestigious and of novel importance".

Amitabh, also a UN ambassador for the girl child, spoke of female foeticide and infanticide, of gender bias and of the country's dismal female literacy levels.

"Everyone can watch a Hindi film, but they cannot read a book," he rued as he presented hard facts about state-wise literacy rates.

"I'll try again to build a girl's school," Big B said as he appealed to the audience that "true equality will only emerge when the whole culture embraces the importance of girl child education".

He spoke of trafficking, prostitution, acid attacks, dowry deaths, bride burning and more, questioning: "Whose blood is this?"

He ended his lecture by reciting lines of his father's poem "Khoon ki chhaap" (Imprints of blood"). An applause followed again.

Big B also sat down for a tete-a-tete with TV host Rajdeep Sardesai and spoke about a range of things. He also patiently answered some questions from the audience, for whom the icing on the cake was his recital of his father's most widely known work, "Madhushala".

For Amitabh, the experience of the event was as exciting as it was for his fans.

"What an enlightened audience, and what an honour to be with them," he posted on Twitter after the lecture.