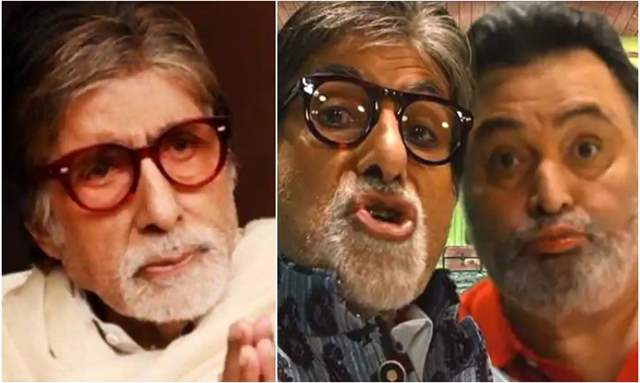 Bollywood's precious gem Rishi Kapoor passed away on April 30, Thursday morning. He was battling with cancer for the last two years and finally gave up. He was admitted to Sir H. N. Reliance Foundation Hospital in Mumbai after complaints of breathing problems.

Rishi’s unfortunate demise is a great loss to his family, friends and fans. Right from his closest co-stars to the ones who did not have the privilege to know him personally, each and every actor from the fraternity felt a big blow and poured in their heartfelt condolences to the actors' family.

Amitabh Bachchan paid an emotional tribute to the late actor Rishi Kapoor during the I For India concert on Sunday which was telecasted live on Facebook. Big B reminisces memories of Rishi, right from when he used to visit the sets as a child to him being an actor of excellence.

Amitabh begins his tribute by recalling the day he saw a young Rishi for the first time at veteran filmmaker and superstar Raj Kapoor’s house. He said, “I would see him more often after , at RK Studios, when he trained as an actor for his film to be made, Bobby - - a diligent enthusiastic youngster, ready to pounce onto every learning that came his way, in that famous large and legendary make up room, of Raj ji at the end of the first floor corridor of make up rooms.”

Bachchan mentioned how his walk resembled his grandfather Prithvi Raj Kapoor, and said, “a walk I had noticed in one of his earlier films .. that walk .. I never found it in any other.” Rishi Kapoor and Amitabh Bachchan worked together in films like - Naseeb, Amar Akbar Anthony and the most recent, 102 Not Out, where they played the role of father-son.

Speaking of Rishi as an actor, Big B said: “When he spoke his lines, you believed every word of it as there was never an alternative, its genuineness was beyond question. Even in the most grave sequences he would discover that comedic spark and we would all just crack up. Not just on set, if you were with him at any formal event , he would find that little distractive light-hearted gem to expand on and lighten the situation.”

The 77-year-old actor also added, “When there was a time lapse as the shot got readied during a shoot , he would bring out his playing cards, or at times pull out his rather complicated Bagatelle board and invite others to play, a competition, not just for fun, a serious competition.”

Amitabh had tears in his eyes as he ended his tribute by saying: “During his time of diagnosis and his treatment he never ever lamented his condition .. it was always .. ‘see you soon , just a routine visit to the Hospital .. I’ll be back shortly. I never visited him in Hospital .. I never wanted to see distress on his smiling cherubic face.”

“But I am certain .. when he went , he must have gone with a gentle smile,” he concluded.

This Independence Day, Dangal TV actors salute our ...
14 minutes ago

Karan Tacker & Saiyami Kher of 'Special Ops' Fame Open Up on ...
42 minutes ago

Shantanu Maheshwari On Bhagat Singh's Efforts Inspired Him ...
44 minutes ago