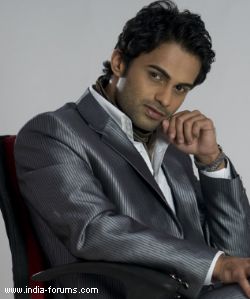 Star Plus' Sasural Genda Phool is bringing in new entrants to make their show interesting. Amit Dolawat is the latest one to join the show. He was last seen on Sahara One's Hi! Padosi...Kaun hai Doshi?

An industry insider states, "Amit Dolawat will play the character of Abhishek, Sonali's (Hunar Hali) husband. Sonali earlier entered as Ishaan's friend. The couple will bump into Ishaan and Suhana in a restaurant. Abhishek will be shown as a psychopath who can go to any extend to prove her love for Sonali. In the future, he won't like Sonali's closeness with Ishaan and will doubt on them."

When contacted Amit he asserted, "I am entering the show as an obsessive lover who loves his wife very much to an extend that he turns a psycho. He also feels insecure by seeing the closeness of Sonali and Ishaan. Very nice character it is."

Amit Dolawat and Hunar Hali will enter the show in tonight episode.

So is an extra marital affair on the cards? The answer lies with the makers...

9 years ago 1st Pia the psycho and now Abhishek, another psycho? Why?

Oh well, please give a decent screenplay, otherwise no twists and turns can do anything to grip the viewers attention. Good dialogues and good scenes are essential.

+ 3
9 years ago Who so ever comes in goes out of SGP..i will watch it till its last episode...
Just love this show from the core of my heart that i just can't leave watching it..
Love SGP,SuShaan,Ragini-Jay and all other characters of the show !!

9 years ago Like Priya wasnt pyscho enough or BP - IShwar was not enough, they had to add one more psycho to the cast!!! God Save us!!!

+ 5
9 years ago another psycho in the show...wasnt Piya enough (props to Shruti for even accepting a role like that...she's better off in SBS) and on top of that Sona is back?

9 years ago whnevr soali enters d show,thr is bound to be sum tension...dis time i thought dat thr wl b no big tensions since she is married..bt NO!!..stll it mite be gud to see sushaan fixing sonali's married life..:)
hoping fr d best..

9 years ago i had loved sonali earlier...hope to like this whole obsessive track now

9 years ago Oho so as if whatever happened earlier was not enough we will now have more Sona-Ishaan chipka-chipki.
Again Suhana will get frustrated. And this new obsessive lover will probably try and create problems.

I dont understand the point of this new track. Cant Suhana ever understand her responsiblities on her own? And why is the obsessive husband needed?

I'm really hoping the CV's have planned something different with this track.. and that somewhere it will make sense.