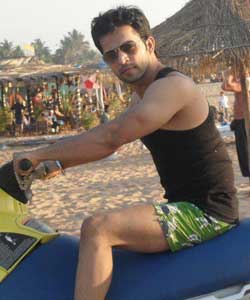 Tellybuzz had earlier reported that Sahara One had launched a one hour Horror Band with Vikram Bhatt's 'HAUNTED NIGHTS'. This week's episode features  Alok Narula, who plays the character of Aditya in  Zee TV's Mrs. Kaushik Ki Paanch Bahuein.

Alok Narula told Tellybuzz, "I am playing the lead in the story. I took up this episodic as it is under the Vikram Bhatt banner and also the character which I am playing is an interesting one. I am playing the character of Kabir, a supermodel and a Casanova playboy who thinks every girl is his. It so happens that in a  fashion show where Kabir and a female model are show stoppers,the latter goes missing.  Gradually, one by one, female models are murdered. The story then hunts the man behind all of this."

Along with Alok Narula, Maninee Mihir Mishra will also been seen in this episode of Haunted.

Riyaa147 8 years ago You're a great actor. Love you as Adi! Good luck for your new show :)

kriti68 8 years ago Alok as casanova...lol...he look too innocent...lets see...how he looks in this role...good luck alok..will surely see this episode.

exclusive
Exclusive Shashank Vyas questions the need for IPL 2020: What good has ...
7 hours ago