View Profile
Twinkle Bajpai, leader of Uttar Pradesh Team in Zee TV's SaReGaMaPa's Mega Challenge, talks about the fact that she owes her independence to the experience that age brings as well as her God-gifted multi-talented nature. 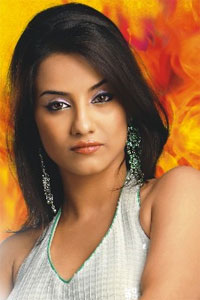 Featured Video
A reality show based on singing, later on dancing add to it a daily soap and now again back to a singing reality show?
I am proud of myself and also thank God that for making me such a multi-talented person. It was difficult to handle both singing as well as acting in a daily soap. But now that I got this show I want to make the best out of it. I am also doing an album which will release soon.

Then why Mega Challenge?
Mega Challenge because Sa Re Ga Ma Pa is the one platform that made Twinkle Bajpai; so it's my duty and responsibility towards them that when they need me I should be there. Sa Re Ga Ma Pa is a dignified stage. It has got a class. Moreover, since 15 years the show has been on air, and it will be fun as it is soon to complete the 1000 episodes mark!

What exactly is Mega Challenge?
It's a small episode series that will go on for 7 weeks. It will end on 12th December on which day there will be the finale. We will complete 1000 episodes and we all are associated with this show so as to make it a celebration!

You seem to be very excited to be part of Mega Challenge?
Yes, I am very excited to be in the show. I am so excited that I'm just waiting to get into the amazing costumes that have been designed for me. I will wear gowns and saris. All the dresses reflect the festive mood. There will be live orchestra for the first episode.

In one of your previous reality shows, you had to endure lots of controversies. So why opt again for reality show?
Any controversy is dependent on the mood of the person. During that reality show we were in that mood. Above all, I am not scared of anybody in life.

What is the concept of the show?
Mega Challenge will be held every Friday. We will perform in a group and Saturday there will be individual performances with elimination of a whole group or state. Every Saturday one whole group will be eliminated.

As a captain of UP group what will be your role?
I am the one who looks after the whole team. I don't wait for Jateenderji to call the contestants for rehearsal; I call them. Yesterday I was with Hemant Brijwasi to make him comfortable.

What changes do you find in yourself in this whole journey?
A lot. I started my career when I was 18 and since then it's been 5 years. All have started to call me didi (laughs). Sometimes I feel awkward but then I say yes I am big. I drive alone. I am now so much independent and as you age, you become more mature.

Lastly what message you want to give to India-Forums readers?
Now the audience will not have any excuse about the vote getting divided. Now everybody will be in a team and if there is no voting I would request my audience to watch our show and support.

tuttykala 13 years ago Even though she is bitchy, and thinks she's all that, she is very pretty and hot :)

+ 3
13 years ago she si almsot like 23 or maybe more .. its obvious younger then her will call her didi
i just cant stand her

+ 5
13 years ago I stopped liking her after I saw her in the Ticket to Bollywood, but all the best to her!