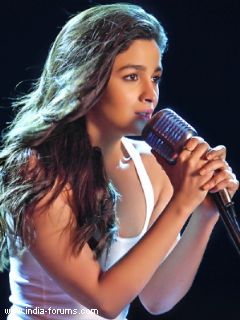 After her successful singing debut in Highway, Alia Bhatt is on her way to mesmerize the world with Samjhawan Unplugged, a melodious rendition of Arijit Singh and Shreya Ghoshal's Samjhawan from her upcoming movie Humpty Sharma Ki Dulhania.

Be it young directors, actors or singers, producer Karan Johar believes in giving fresh talent a platform to showcase their talent to the World. In this case too, mentor Karan Johar has pushed Alia to take her singing a step further with Samjhawan Unplugged.

Samjhawan Unplugged releases on 2nd July on select online portals followed by an exclusive video on 4th July. That's not it, gear up for a special live performance by Alia herself, who will perform on Samjhawan Unplugged tomorrow in front of a select audience and media. And the entire event will be presented by Varun Dhawan, to whom Alia has dedicated this song.