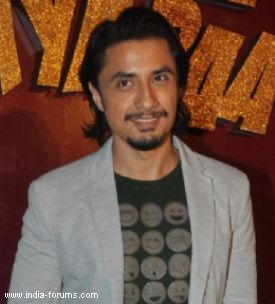 Pakistani singer-turned-actor Ali Zafar, who is gearing up for his next Bollywood venture "Total Siyappa", says the audiences in his home country as well as India are going to relish and cherish the romantic comedy.

"Whenever we talk about India and Pakistan, people get very sensitive, but this film has balanced it in a very light way. Every person in Pakistan will enjoy the film as much as people in India. The film will bring people closer," Ali told reporters at the "Total Siyapaa" trailer launch.

Directed by E. Nivas and written by Neeraj Pandey, "Total Siyappa" is the love story of a Pakistani guy (Ali) and an Indian girl, played by Yami Gautam who made her debut in Hindi films with "Vicky Donor".

In the film, there is a scene where Ali and Yami are having a conversation over Pakistani cricketer Shahid Afridi.

Ali is confident that Afridi, one of the most "adored and loved" cricketers at the moment, "will hug me" after seeing the film.

"My real fans will perceive it in a right way and everyone will come and watch the film," added the actor who has featured in other Bollywood films like "Tere Bin Laden", "Mere Brother Ki Dulhan" and "Chashme Baddoor(2013)".

Rhea Sharma to be seen in Ekta Kapoor's next?
26 minutes ago