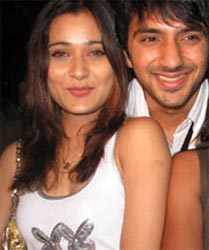 TellyBuzz recently reported that Sony's Aahat, produced by Fireworks Productions will have a celebrity special in the month of April wherein five leading ladies of television will be seen in episodics. We had also mentioned that Tina Dutta from COLORS' Uttaran, Sara Khan from Star Plus' Bidaai, Pallavi Subhash from Sony's Godh Bharaai, Natasha Sharma from COLORS' Na Aana Is Desh Laado and Mahhi Vij from COLORS' Laagi Tujhse Lagan will be seen in action.

While the episode featuring Tina Dutta will be aired this Friday, April 2nd, the second week will see Sara Khan in action.

According to our source, "They play a couple who buy a house which is haunted. The manner in which they come out of the situation will be the story".

When contacted, Ali Merchant confirmed the news and said, "Yes, I am for the first time sharing screen space with Sara, and we play a couple for Aahat. It was a wonderful experience".

Talking about her girl Sara, Ali goes on "Sara is a superb actor. We both are like North Pole and South Pole when it comes to our shooting style. She is very serious while shooting, but I look to crack jokes even on set. But while reading the script and getting ready to shoot, I take things very seriously, and take my own time. But Sara on the other hand, is very chilled out and looks more confident.  She actually claims that I am a very difficult actor to work with (smiles)".

Ali has already featured in one of the episodes of Aahat. The episode featuring Sara and Ali will be aired next Friday, April 9th in Sony's Aahat.

rheasinha 10 years ago @meharkhan3:Haha,inlogo k convenience k liye "aakashvani" hui thi kya..???Kisi-kisi k profile me "takla" ka photo hota hai toh kya woh "taklu" ka fan ho gaya..haha..!!! Dia is an awful actor with an awful voice.I think she and sara should b kept in a museaum because they r bad acting personified...hehe. That girl sara seriously needs acting lessons. Bidaai should come with a STATUTORY WARNING that sara's acting and face can b injurious 2 health. Watch at your own risk..hahahahahaha!!!

scrpngl 10 years ago @meharkhan3..
oh ya ya whteva.. so yu can only be a fan of this "Dia" who herself doesnt even know how to speak.. n thats make me scarrrrrrrrryyyyyyyyyyyyy... ROFLMAO! ***
and Sara.. well ya beauty has hatersssss.. n thats truee!!!
@Zee.. sure yaar... Sara and Parul Rocks.. they have fanclub of haters.. Lmao.. as i said before.. Famous pplx have fanclubs of haters! ;)
yaar i guess next week.. as this week is of Tina Dutta! em not confirmed!
@mehar..
kyun jhelti ho phir tum behennn?? itna mat jalo.. Sara ko bhi bura lagega k uski wajah se koi jal jal k kabab ban gaya hai! LMFAO! *
jao apni Dia ko jhelo... or sath mei Gaao.. Bhayya All is Well... ahahahahahhahaahhhaha ;););)

rheasinha 10 years ago @meharkhan3:Hehe...looks like kuch log der se seekhte hai. Anyways,Aahat is a preety scary serial and now it is going 2 b scarier with so many scary-looking people appearing in its episodes...hehe

rheasinha 10 years ago Well i dont think i need anybody's permission to comment on SARA KHAN.If u can't bear it u r free 2 shut ur eyes or look the other way.If u r free to like her so even i am free to hate her.I will comment on her whenever i wish and i will use whatever word i feel like using.There is nothing u can do to stop me or others.What will u do?Break my PC???????

rheasinha 10 years ago dude spare us,as it is sara khan is a big bore and now her bf is also joining her.And u fairislove everyone have their own opinions about everyone just because u like sara so it doesnt means that everyone's gonna love her too.

*Eva* 10 years ago Cannot WAIT to see Ali & Sara, especially Sara on Aahat!!!! EEEK!!! Sara is ROCKING these days...maha proud to be her fanatic! :D

Again, I dont need to keep mentioning that Sara has gotten a lot of recognition and many awards for her role as Sadhna in Bidaai. She continously proves that she is one of India's BEST TV actresses out there...need I say more?! :)

And please...dont compare Sara & Parul. They are such good buddies in real life...dont make their dosti a mockery. Thats a request from a die-hard SaRul fan. :)

Sara Ali Khan heads to Mumbai as she receives summon from ...
50 minutes ago

Bigg Boss 14: First look of the shopping mall, theatre and ...
59 minutes ago