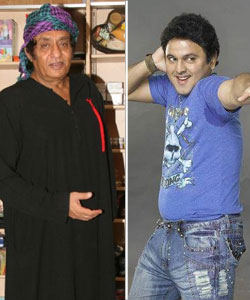 It is no secret that Chota Ganpati Telecreations is coming up with a show titled Khel Khel Mein for Star Desh, we broke the news already! To let the cat out of the bag, we also scooped out some hidden news about Asif Sheikh and Rajendra Gupta, the veterans who were roped in for pivotal roles. But the latest development is that the two multi-talented actors are no more a part of the show.

Asif Sheikh's character will now be played by Ali Asgar and Rajendra Gupta's role will be performed by Bollywood baddie Ranjeet.

We called Asif who confirmed the news, " Yes I was offered the role but due to date issues I couldn't take up the show. I am playing the main lead in another show so there were a lot of complications regarding my dates. The role was initially offered to Ali and then came to me but now again he is doing the show."

Aditi Tailang has been approached to play the main lead in the show along with Amit Tandon who will essay one of the key characters.

With two new talented actors being roped in, we hope the show gets full support of the viewers...

+ 2
9 years ago I they had to replace Aditi,they should have replaced her with Shweta Gulati...
The chemistry they shared in DMG, everyone knows abt that and I don't think I need to put that in words!!!
Missing my Shwit,my AN :(

9 years ago I was waiting for this show because of Amit and AG's jodi now it doesn't seem fun any more :(

9 years ago Wow Amit Tandon is back. I missed him so much after his and Shweta's track ended in DMG.

9 years ago very sad. additi gupta is not doing this show. we miss u ag. aal u r fans are waiting for this show bcz of ag. now no interest at all.

+ 5
9 years ago im waiting for aditi to return!all the best!