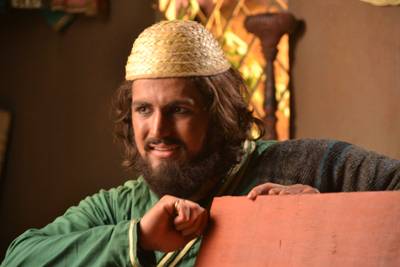 Fighting for the cause of child-marriage, this week in Jodha Akbar, viewers will see Akbar in a completely new and different look on the show. Going against all odds to help save a 14 year old girl from being forced into child marriage, Akbar will dress in disguise as a choodiwala in order to get to the root of the matter.

Understanding that a 14 year old girl from his kingdom is about to get married to a man double her age, Akbar along with some help from Jodha takes up the cause of putting an end to the regressive tradition of child marriage in his kingdom.

In order to investigate who the man is, Akbar dresses up as a choodiwala so as to not to be recognized by the henchmen of his kingdom. In his attempt to unearth the truth behind this child marriage, Akbar discovers that it is none other than his evil step-brother Adham Khan who has forced the marriage upon the poor girl by offering her greedy father the lure of riches.

Donning a completely different look for the sequence, actor Rajat Tokas as the 'choodiwala' is a stark departure from his usual look of Emperor Akbar. Wearing a long robe and sporting a scraggly beard, Rajat looks quite convincing as a Mughal choodiwala.

About this special sequence, Rajat said, "I had no idea what a choodiwala back in the Mughal era looked like until I donned this unique look ... I quite enjoyed getting into this character as it was quite different in terms of get-up, body language, demeanor and style of dialogue delivery ... It is intriguing that an emperor should go to such great lengths to get to the bottom of a serious issue and take a strong stand against malpractices in his kingdom. The subject of child marriage is a very interesting track on the show and has captivated the audience attention."

Akbar will be joined by Jodha (Paridhi Sharma) to fight the cause and eradicate child marriage from his kingdom. Will Akbar's strong stand against Adham Khan and child marriage irk mother Mahamanga (Ashwini Kalsekar) and evoke her to act against him?

vacchii 6 years ago Anybody is lucky to watch Rajat Tokas perform! He not only acts but lives the character on screen!!

stephhh 6 years ago Rajat Tokas is the best ... u rockkk...love u as Jalal

vacchii 6 years ago Rajat Tokas gets into any character easily!!! He's a superb actor!! Love him Love Jodha Akbar

lilac2 6 years ago RAJAT TOKAS YOU ARE THE MOST TALENTED ACTOR OF TV AND YOU ARE THE BEST SHAHENSHA JALALUDDIN MUHAMMAD AKBAR EVER...

Angel- 6 years ago Rajat Tokas ,Such a royal look u have...