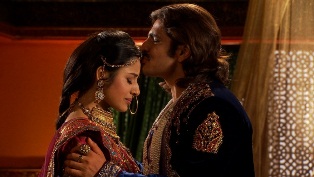 Hailing from different worlds in the show, the Rajput Princess - Jodha (Paridhi Sharma), and the Mughal emperor - Jalaluddin Akbar (Rajat Tokas) are known to be at loggerheads for various issues. Beginning to understand each other slowly, there is romance brewing between the two on the show.

The current track of the show Jodha Akbar focuses on Akbar banishing Jodha from the palace when he finds out that she has been meeting a stranger in the middle of the night. A plan well devised by Mahamanga (Ashwini Kalsekar) to plant misunderstandings between the two. Promising her brother Sujamal of keeping their meeting a secret, Jodha does not even tell Akbar about the stranger being nobody else but her brother. Obeying Akbar's orders, Jodha is all set to leave the palace just when Akbar realizes that it was only her brother she was meeting and goes to her to apologize. Falling at her feet and repenting for his deeds, Akbar gently kisses her forehead and kisses away the tears from her cheeks in an attempt to make up with her while Jodha reciprocates to this by kissing his hands, the two of them instantly make up.

This marks one of the first few scenes of physical proximity between the royal couple and their romance has been very subtly showcased in this first-of-its-kind kissing away of the tears' on television.

Vartika07 6 years ago all was imaginary ..

Koi nahi we know that we will get enough in coming episodes..

Meow13 6 years ago I love my Akdha..waitng to see them together

DushtDanaf. 6 years ago Love you Rajat Tokas !! Only watching the show for Jhallu !!!

Paridhi Sharma And Rajat ToKAs are the best!