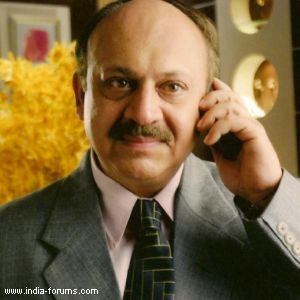 Sphere Origins' popular show Balika Vadhu is all set to witness a new entry in the show. As seen in the ongoing episodes Dadisa who is out of the jail now was put behind bars for killing Het Singh's son who tries to attempt a rape Gulli. So to penalize Dadisa, Het Singh files a compliant against her and the hearing of the case is happening in the court.


The viewers will witness the entry of veteran actor Akash Khurana as Shyamlal in Balika Vadhu. He will be seen playing the role of a politician who looks after the young generation and their political issues. He will help Jagdish's (Shashank Vyas) family where he will try and understand Dadisa's situation as she  was in the jail. Jagdish will be impressed with this politician as he is helping Dadisa. But his intentions to impress Jagya will soon come out in open as there is some motive behind it. So he might be seen in a grey shade character.

Shashank Vyas who is playing a lead role of Jagdish in Balika Vadhu says, "I am glad to work with such a senior actor. It is a great experience to share the screen with him and I am getting a lot to learn from him. He has a brilliant acting ability and I am very happy with his entry in our show."

It will be quite interesting to see the upcoming episodes of the show Balika Vadhu!

sanw 6 years ago said to be a spiritual charcter ...
hope we see something new with the entry of this character

Rama4U 6 years ago Shashank Vyas, when will you give us mukthi from this crap show??

yanks28 6 years ago shashank vyas, missing your jodi with sriti jha so much, two outstanding actors, anyway Balika Vadhu has rarely understood the worth of actors and even now they don't promote you as much as they should.

Spring-Dew 6 years ago Shashank Vyas u r an amazing actor!!!!!!

Adr_Rush 6 years ago Thanks for sharing

Avika.Gor 6 years ago This show dont have anymore sense. Boring, boring, and boring !