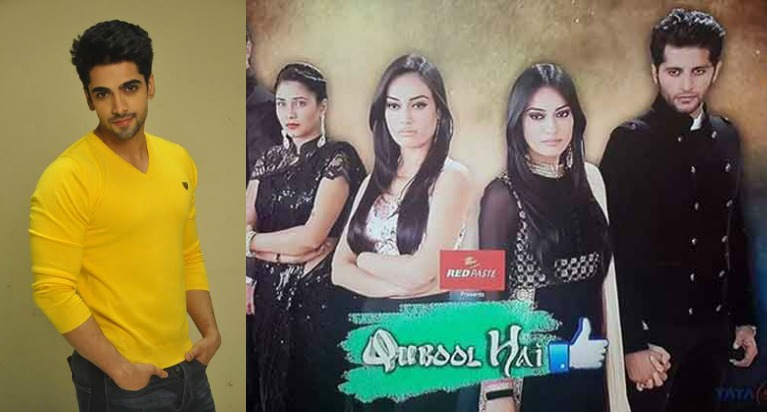 4 Lion's Films' popular show Qubool Hai on Zee TV, after the leap is high up on drama as Ahil (Karanvir Bohra) comes to know about fake Sanam's real intentions. The makers it seems are leaving no stone unturned to bring twists in the tale.

After Additi Gupta, actor Akash Ahuja will enter the show to spice up the drama. The actor rose to fame with Channel V's O Gujariya : Badlein Chal Duniya and is making a comeback with Qubool Hai.

Our source says, "Akash will essay Saif's character who is a good looking boy and is Shaad's brother. He will enter the show as Nazia's boyfriend, who is Ahil's (Karanvir Bohra) sister. New Sanam (Additi Gupta) will get attracted towards him and will want to marry him. She will get intimate with Saif and he will however, get trapped in her love. Later, she will use him as a pawn to execute her awful plan."

We couldn't reach through Akash for the confirmation.

We wish Akash Ahuja all the best!

+ 2
6 years ago These actors have to be either hard up for money or hard up for work to want, to b a part of this filth called QH.

What is this QH or the bold and the beautiful where you lie, cheat and sleep with anything to achieve you goal, what the hell is going on in this show.

No matter what Gul say the plug will be pull on this show, Zee has a few shows in the pipeline, two should be out soon, so no matter what she say this show will get pulled.

+ 6
6 years ago I am not at all surprised this guy is Shaad's brother. Both have questionable characters, so it makes sense they are related. But honestly, this show should end now, coz it seems they have no intention of uniting the REAL leads and want to keep showing FAKE romance! If not for KV I would never watch this!
@amreen2000: The makers will never give viewers any justice. They are in the business of making money through misery of others.

6 years ago Qubool hai 1 and 2 were good but qh 3 is really crap ..i feel sad for all actors on board..i hope it ends soon and actors are free from this crappy production

amreen2000 6 years ago this show has gone crazy, why the makers dont give the viewers the satisfaction of two lovers uniting or leading a happy life and who in their right sense goes around murdering people left right and centre

Why does Gul has to do this isnt there anyother way to show a connection !!!!!!

6 years ago What happened? They said it is going to end this August...

6 years ago Just end the stupid show! Anyways, whoever is STILL watching the show r just laughing at the show...Utter crap!
Bring in new characters or bring new nonsense twists and turns but nothing is going to help this show...Its not goind to regain its TRP. So just stop the show and spare us the torture! ITS PACKUP TIME FOR THE SHOW! PLZ DONT DRAG!

+ 6
6 years ago @Az07:
Yes it is high time they ended this show, because the story is becoming trashier and more gross day by day. They have covered all manner of sick and perverse things and cant fall much lower than this. It's time to end it! Please end this rubbish so everyone can move on and the actors can get better projects, and enact scenes that dont make them and also the audience both feel sick to their stomachs. What this show was, and what it is now! Pure trash with no story and no point! KV is the ONLY thing I like in this show now!

+ 4
6 years ago I was happy that show going off air in august but gul confirmed that it's a false news. This article doesn't make any sense. How cone saif is shads bro? Don't say he came to India to study from Pakistan when they have excellent universities in Lahore & Islamabad. Now sanu will attract saif & get intimate with him? As far as I know she is not a normal human being. Kuch bhi. Without meeting saifs family Ahil will agree to the marriage? I think saif being shads bro is a wrong news. Or he is a long lost bro of shad as usual. I seriously want the show to end. If not in august then at least in October when there contract ends. Hope zee won't give extension after this October. As far as I know few new projects are coming up in zee tv this year. Better end qh in October at least. Want to see Surbhi jyoti in a new show. If this ends she can take up good projects.