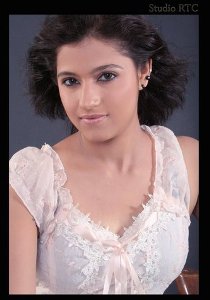 Akansha Juneja who started her career in television with Star Plus' Mahayatra, followed by Colors Thoda Hai Bas Thode Ki Zaroorat Hai and lastly in Sahara One's Hamaari Beti Raaj Karegi, seems have taken a high jump and is all set for a B town ride.
A source informs, "Akanksha Juneja has signed a movie currently. Though the shoot has not started, the workshop for the character will be held within a week."

To get a confirmation from the girl herself, we contacted Akanksha and she shares, "Yes, it's true that I have signed a movie under the banner of MTE production house. The movie will be released in three different languages namely, English, Bengali and French as the producers wanted this movie to be a worldwide release."
Talking more about the movie she tells, "The movie is titled [email protected] where I will essay the role of Rhilmil, a very happy go lucky married lady who has complete trust in love marriages and love. She has the character of going around promoting and convincing people about love marriages."
"There are many veteran actors in the movie but right now I am not authorized to speak about it,"adds Akansha.
When asked Akansha about her come back on television she clears, "Right now I would be concentrating on movies and not on television, but would definitely want to come back if I come across an interesting project."

We wish Akanksha all the very best...
Reporter and Author: Tejashree Bhopatkar

xixi 11 years ago could someone tell me where can i fond the "Sinndoor Tere Naam Ka" movie . In china ,i saw the movie, like it,so ,if someone know ,please tell me !~thanks!~
follow is my E-mail
[email protected] (or) [email protected]

11 years ago @ valentine143: Please dont spoil the story in this topic, for people who haven't watched it yet. Just overall reviews only. (or alert ppl with a ''spoiler!'') Thanks.

valentine143 11 years ago The movie was timepass. I didn't get bored. Ravi Kissen was very good. The double role twist at the end was ridiculous. Thankfully, there weren't too many songs. It's a different movie and you can see it once.

11 years ago sounds like a nice n action-packed movie

I watched this movie yesturday && it was sooo damnn Amazziinngg...
Worth watching in theatres ONLY. The sound, stunts, dialogues sceness.. everything wass soo guudd.. even the songs! daaaaaaaaaaaamnnnnn, i was speechless after watching LUCK! Imraan looks soo cuttee <3

11 years ago Watch the 2005 french release 13 TZAMETI & then watch LUCK.
I'm sure u'll run from the theatre during the interval yelling 'WHAT THE LUCK?!!!!! :)
gals,i know u'll luv it for 'cute' imraan but guys seriously watch 13 TZAMETI and dont even accompany ur gf's to watch this movie.
13 TZAMETI will keep u on ur toes guys...go fetch its dvd and u'll keep it in ur collection.
I'm still waiting for a desi director to remake it in hindi by givin it complete justice.

+ 4
11 years ago Just watched the movie!
Its AMAZING! Nd the USP of the film is undoubtedly Imraan!! He acted very well.. Looked shoo hawt!!

11 years ago its a nice movie .......i really liked concept :)
everybody has acted really well