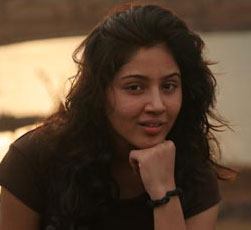 Featured Video
The track in the serial is precariously poised where Meera who suffers from brain tumor forces her husband Sumer (Sachin Tyagi) to get married to her friend, Shikha played by Ekta Sharma. Talking about the interesting twist in the tale, Akangsha quips, “Meera realizes that she is not suffering from brain tumor and this was a well-thought of plan by Shikha to throw Meera out of the house. The story will now move ahead wherein I expose the evil side of Shikha before my family. It is a tough battle ahead for Meera as her family now hates her”.

When asked whether she has any other offers in hand, Akangsha reveals that she has been part of a periodic film, ‘Sab Ke Malik Ek Hai’ starring Jackie Shroff. “The film has many small stories; mine is a short role wherein I play an ardent Sai Baba devotee. I am waiting for my brother on the day of Rakhi, but he does not come on time. This is when Sai Baba played by Jackie Shroff appears before me and I tie Rakhi on him and dance too”.

Lastly, when we ask the actress regarding the buzz on Solhah Singaar wrapping up, she laments, “True, this news has been making waves for nearly three months now. But the channel has not talked to us about it. I am getting loads of offers, but I am in a dilemma right now as nothing about the future of Solhah Singaar is clear”.

+ 3
13 years ago aha i remeber the days when KSG was on the show these both shared good chem :)

13 years ago i love her. gud luck AKangsha for the future