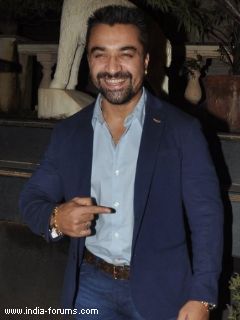 Reality show star and actor Ajaz Khan has caught Sanjay Gupta's attention. The filmmaker has offered the former a role in his new gangster film "Mumbai Saga", which already has John Abraham and Vivek Oberoi in the cast.

The two met on Tuesday morning at Gupta's residence and hit it off right away.

Ajaz is grateful and joyous.

"So many top directors have promised me fantastic roles. Forget fantastic roles, they've never returned my calls after the initial promise. Sanjay Gupta called me home for 20 minutes and spoke to me like a buddy for two hours, offered me respect, love, food, juice and, above all, a role," he said.

"I feel my faith has been restored in this industry. I've been betrayed and stabbed in the back too many times. Here, finally is a director who has the guts to cast a Khan who is not a superstar," Ajaz added.