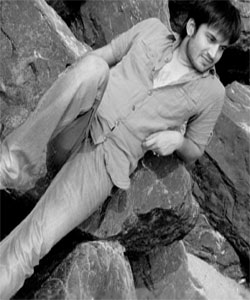 Ajay Chaudhary, fondly known as Ustaad of Kumkum is utterly disappointed on not being a part of the last few episodes of the Star Plus show that ended on March 13th.

"I regret that I was not part of Kumkum when it ended. I loved to play the character of Ustaad and it was very much liked by the audience too. But unfortunately, the character did not get its due when the serial ended", quips Ajay.

When asked him about the reason, he says "I was shooting in Los Angeles for one of my films. It is produced by an NRI Production house. Some portions of the film were to be shot in LA and I had to be there on those days. I have just returned from my long trip. I had got a call from the Kumkum team to be part of the grand Sumit-Kumkum wedding, but I could not make it because I was shooting there".

Ajay Chaudhary played the very lovable character of Ustaad who had been helping Kumkum (Juhi Parmar) in her struggle to get back to her love, Sumit(Hussein Kuwajerwala).

The actor has three films lined up for release..

We hope Ajay bags yet another meaty role in television soon!!

13 years ago bless him! its not fair tht he was axed from the end! he deserved to find someone in the end! he was soo good in KumKum, and helped her alot, thy shd hv dne smthng for him!

+ 2
13 years ago Ajay,
U dont know how much we missed you on the show.
we wanted U there during SU-KK milan and especially during there marriage.
Your character would have been the happiest had U been there

sooo great yaar.. he has 3 movies on floor! wishing him all the best!!

13 years ago ohh so that''s why he wasn''t there in the final epis of Kumkum...yeah his character Ustaad was a fantastic and Ustaad was a must in Sumit Kumkum''s wedding and yeah, he didn''t get his due at the end. Anyway all that in the past. we love u Ustaad and all the best to your upcoming movies!

+ 4
13 years ago Wow,meri kulfi in films-Can''t wait to watch his movies..He''s awesome!!....
I wanted to see him in the last epis,but no worries,I''m gonna wait for his upcoming shows!

+ 2
13 years ago Aww...well that gives us an explaination as to why Ustaad wasn''t there...Ajay did an amazing job as Ustaad. His comic jodi with Juhi whenever they changed their getup was really good. I wish him all the best for his future projects..

+ 3
13 years ago hi thanks for the article........awww....i can understand his disappointment. we all missed him in the serial. and wanted to see him the Grand Shaadi of Summit and Kumkum. well anyway best of luck for his future projects
Ajay you will always be in our heart as USTAD