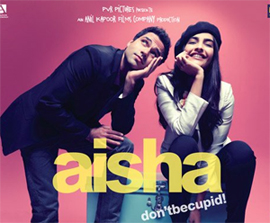 PVR Pictures and Anil Kapoor Films Company's girl-power movie 'Aisha' has set a new benchmark in the Indian Box Office history for a female protagonist led film. The first weekend collections point to an impressive worldwide theatrical gross of Rs 26 crore. 'Aisha', which opened with 475 screens in India and 135 screens overseas, is now one of the biggest films featuring a female lead. An ensemble star cast led by Sonam Kapoor & Abhay Deol has impressed the critics and audiences alike with their performances. The stylishly made 'Aisha' has had an instant connect with the youth & female audiences, and is now being referred to as an effervescent coming-of-age film for the Indian Film Industry.


Commenting on this Mr. Deepak Sharma, Head – Worldwide Distribution, PVR Pictures said, "We are extremely delighted with Aisha's initial response at the box office and expect the film to set a new benchmark for female protagonist centric films in India."