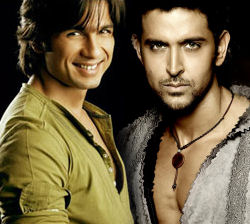 Ever since Shahid Kapoor set foot on the stage as a dancer, he has been compared with Bollywood's best dancer Hrithik Roshan. Most people were skeptical of Kapoor and refused to believe that he is better than Roshan. Kapoor has always claimed that it was unfair to compare the two because he hardly had a chance to show off his skills just yet.


But times have changed and some people are already claiming that Shahid Kapoor is indeed a better dancer than Roshan. According to Ahmad Khan, Kapoor is the best dancer in the industry and Roshan is just plain boring. He believes that Kapoor understands the technicalities of the dance which is not the case with Roshan. Khan thinks that Kapoor is spontaneous when it comes to dancing which makes it more enjoyable and better than the skills of Roshan or even Devaa.


Well, it's quite clear that Khan prefers Kapoor over Roshan but it's up to the audience to decide who is the best at the end of the day.