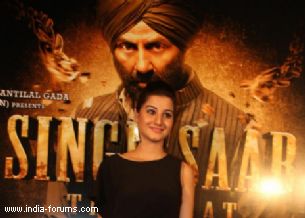 Model-actress Urvashi Rautela, 19, has shot romantic scenes with 57-year-old Sunny Deol for "Singh Saab The Great", but so what? Age is merely a number, says the debutante.

She says she was "not at all" sceptical before signing the film.

"Age doesn't matter to me. What's there in the age? It's just a number! When we can see Rajinikanth romancing Aishwarya Rai madam...it's just like that. I know it's a big age gap, but we are all very professional and as long as we look great together, nothing matters," Urvashi told IANS.

She says her "chemistry" with Sunny looks "great on screen".

Urvashi bagged the Miss Universe India title in 2012, but she was later dethroned because she didn't meet the age requirement.

A dancer trained in five different forms, she says she would love to do a film where she is able to harness her talent to the hilt.

"I have learned five different dance forms including Bharatnatyam, kathak, hip-hop, jazz, belly dancing. That's the reason I would like to do a film on dance," she said.

Ganesh Chaturthi 2020: Urvashi Rautela prays for her fans as she asks ...

Saying Goodbye To 'Keeping Up With the Kardarshians' - ...
19 minutes ago

Here Are The Indian Shows That Made it To International Emmy ...
41 minutes ago