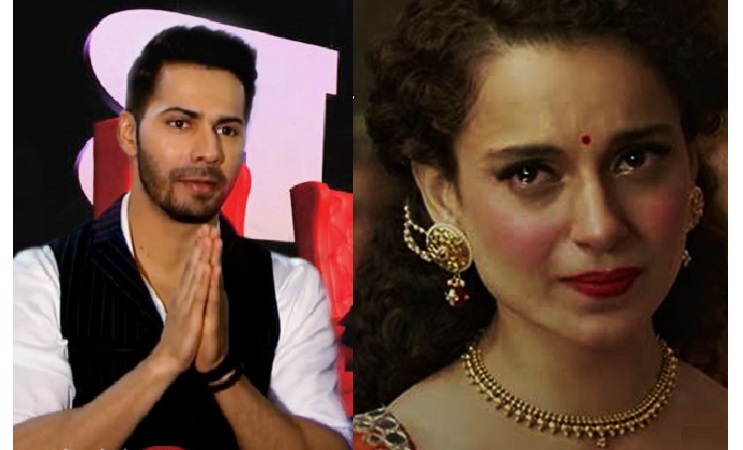 Actor Varun Dhawan has apologised for his "Nepotism rocks" act at the IIFA Awards in New Jersey, that created a stir over social media last week.

Varun, son of veteran filmmaker David Dhawan, along with filmmaker Karan Johar and actor Saif Ali Khan, sparked the controversy over the nepotism debate at the awards gala. Later, all three of them received flak on social media with twitteraties calling their act "disappointing".

"I express my apology and regret... I am extremely sorry if I have offended or hurt anyone with that act," Varun tweeted on Tuesday.

Karan and Saif, who were hosting the gala, revisited the much-talked about nepotism issue that started in Bollywood when actress Kangana Ranaut branded Karan as a "flagbearer of nepotism" on his chat show "Koffee With Karan".

When Varun joined the two actors on stage at the Metlife Stadium to receive the Best Performance in a Comic Role for "Dishoom", Saif joked that the actor had made it big in the industry because of his father.

"You are here because of your papa," Saif quipped.

Varun said: "And you're here because of your mummy (veteran actress Sharmila Tagore)."

Karan then promptly added: "I am here because of my papa (late filmmaker Yash Johar)."

They then said in unison: "Nepotism rocks".

Later on, a string of criticism followed over Twitter, describing what the personalities said was unfunny and joking about Kangana in her absence was unfair.

‘Rishi Kapoor Took My Attention Away from Son Saif in Hum Tum’: ...

Karan Johar Exposes His Greys For The First Time

Karan Johar's Kids Royally Roast him and his Kurta; We Wonder What ...

nmteddy 3 years ago Why is everyone forgetting that everything is scripted? They're just getting paid to do a job if anyone needs to apologize it should begin with Star.

asdj 3 years ago Apology Not Accepted ! Specially Since It Stinks High As the Skies, That Varun is afraid to loose out on Fans Who Actually Pay to See His Films. A Few Success Has Gone to Their Head that they think its ok to diss Kangana R!
IMO the worst of the 3 is Saif! NOT ONLY BECOZ OF MOMMY BUT ALSO IN HIS 1ST DECADE OR SO HE RELIED ON HIS EX-WIFE, AMRITA SINGH TOO!
Karan is Whiner Who W e Cannot relay on to tell the truth as he has yet still to acknowledge is sexuality !

Sanskruthi 3 years ago This lad is apologising for the offense not words... I don't know when these so called public figures will realize the impact of their statements for fun!

Poli.Geek 3 years ago He didn't apologies for what he did. He instead used a very deceptive non apology to apologies that others got offended and he was sorry for that.

A real apology would have been saying that I am sorry for what I said. And I do acknowledge that I am very lucky that my father is in the industry and that's why I got my break. That there are many others more deserving who don't get a chance similar to the one I got and that is probably depriving the movie industry of great talent.

Mogwai 3 years ago Karan Johar, Saif and Varun - I find all 3 of them highly irritating and incredibly annoying. Nepotism rocks?!? What kind of nonsense is that? Perhaps they were trying to be funny but epic fail. Hate it when celebs get too big for their boots

asmani 3 years ago Varun is a pathetic excuse of an actor. he got a name and is getting movies only because of his father. So many talented new comers, talented TV actors do not get chance in bollywood because of these useless starlets and nepotism.

Karan JOhar is the other pathetic excuse of a man who needs people to gangue against a woman who has guts to say the truth on his face.
Nad the fact that they are ganging up against an woman that too in her absence, proves the truth in Kangna 's claim and it shows their shameless characters.

Public apology will do little to compensate for his poor shameless act.

luvdesitelly 3 years ago Sorry Varun but your fake apology is not going to work. Slamming someone on international platform is not sign of maturity and professionalism. But then again what else can we expect from you since your mentor is vicious, childish, selfish, stuck up DHARMA QUEEN!

myviewprem 3 years ago Out of 300 odd movies made in Bollywood hardly 2-3 are worth watching and none of world class quality. Most are poor copies of hollywood, japanese, south etc movies. Do Varun Dhawan, Saif or Karan deserve to be in bollywood if they were not someone sons? Would they make it on their own- everyone knows answer. Even more talented cannot make on their own. But public making fun of a actress because she spoke truth and ganging up on her again and again also raises doubts on the values and psyche. Its nepotism and patriarchy on display. The apology is just face saving(so they do not lose fans), they do not mean of word of this apology in first place. These people do not even realize that they have confirmed her every words as truth and nothing but truth by their actions and words again and again