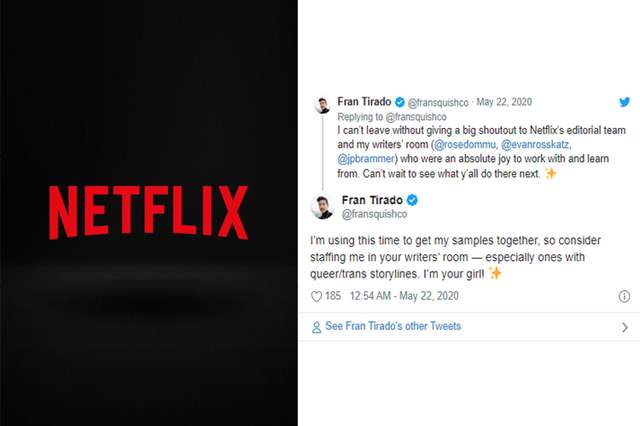 There has been a wave recently in connection with the representation of LGBTQ characters in multiple films and shows over the years, and now another instance pertaining to an exit from Netflix.

There is a lot of talk related to Fran Tirado's exit from the streamer, where he worked for 10 months in brand and editorial strategy for LGBTQ content, heading up the streamer's inclusive @Most social channels. He announced his departure May 21 on Twitter, only a week after The New York Times Sunday edition published an interview with Tirado, including a diary of his workweek. He listed duties ("Catch up with the team running Ryan Murphy projects to talk through production updates") as well as musings ("The edible has hit, a triumph").

Sources indicated that the interview raised eyebrows for overstating his position, among other potential red flags. A Netflix spokesperson confirmed only that he's no longer with the company. Tirado, who has held top positions at Out and Hello Mr., declined to comment, except for what he'd posted on Twitter: a call to "consider staffing me in your writers' room — especially ones with queer/trans storylines."

Abhishek Bachchan Tests Negative for Coronavirus After ...
4 minutes ago