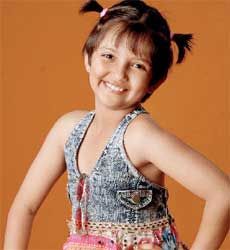 We now bring you the news that yet another popular child artiste Ahsaas Channa who was seen in Phoonk and also on TV as Ganga Walia in Zee TV's Kasamh Se will be playing an important role in Zee TV's Shobha Somnath Ki.

We hear that Ahsaas  will be playing the character of Loma, a girl in the village.

We called Ahsaas' mother for a confirmation, but she told us, "Nothing is confirmed yet".

The show will replace the historical show Jhansi Ki Rani and will launch on 20th June at the 8 Pm slot.

CrazyChatterbox 9 years ago i so cannot wait for ahsaas to be back on screen.. loved her as ganga walia, and also as srk's son arjun in kank..