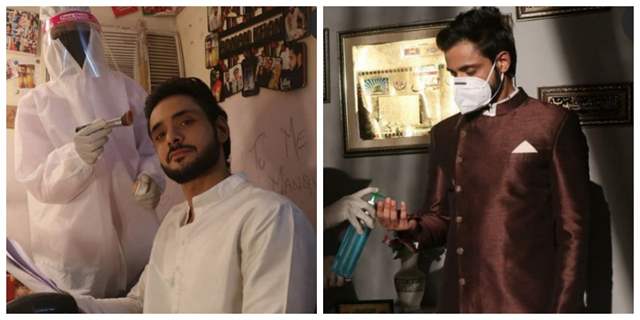 The shootings of Television shows is finally resuming and the makers are taking all the precautions, keeping the safety of the cast and crew as the utmost priority. Several shows have already started airing their fresh episodes and have brought in various drama and twists to their storyline to entertain the viewers.

Adnan Khan who plays the lead role Kabeer Ahmed in Zee TV's famous show 'Ishq Subhan Allah' has started shooting for the same. Adnan had fallen ill a few weeks ago and had taken the Covid-19 test and the reports were negative. Now, the actor is back on the sets and is seen taking all the precautionary measures and is seen wearing a mask.

Have a look at the pictures from the sets below:

Apart from this Eisha Singh who has gained immense popularity as Zara Siddiqui has returned as the lead in the show. It will be interesting to see what other twists and turns will come up with the upcoming track of the show?

Adnan Khan NOT WELL; gets the COVID 19 test done!

Zee TV's Ishq Subhan Allah to return post lockdown but with a twist!

SamW92 21 days ago Very very excited for the new episodes. Can't wait to see Eisha Singh & Adnan Khan back on screen. Eisha Singh was so good as Zara.

Hina Khan shares that she felt like a baby working in Naagin ...
9 minutes ago

Varun Dhawan and Kiara Advani all set to star opposite each ...
19 minutes ago